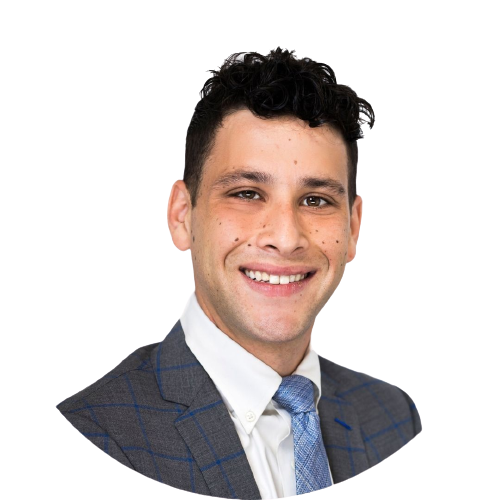 In his free time, Rob is an avid runner who runs every day. He is a diehard follower of the UFC who watches all of the fights. He enjoys movies, art, and literature.  Rob also loves standup-comedy and is always up for a good podcast. When Rob is not working hard for his clients, he can also be found spending time with his longtime four-legged companion, Charlie.

is an Associate Attorney at Demesmin & Dover Law Firm.
‍
Rob is a native of the northeast, growing up in New York and New Jersey. At age nine, Rob moved in with his grandparents, who he would live with until he began boarding school in Massachusetts when he was fifteen. Rob credits his grandparents’ positive influence and his time away from home as huge factors in providing the necessary guidance for him to succeed professionally. He developed a hard work ethic and a mentality devoid of the idea of quitting. After high school, Rob moved down to Florida and got his associate’s degree from Broward College. Upon completion of his two-year degree, Rob transferred to Florida Atlantic University where he would graduate summa cum laude with a bachelor’s degree in Criminal Justice.  Rob had always wanted to be an attorney and his time learning about the criminal justice system only solidified this thought. After his time at FAU, Rob began law school at Nova Southeastern Shepard Broad College of Law where he would goon to graduate magna cum laude. During his time in law school, Rob was a proud member on the board of executives of the First-Generation Professional’s Legal Society, an organization designed to apprise students without professional family members of important information about a career in law. He helped coordinate events and discussion panels to assist other students in similar situations in leveling the playing field to help everyone succeed. During law school, Rob was also a teaching assistant for the 1L Civil Procedure class where he helped students review the material and develop good test-taking strategies. Rob also greatly enjoyed Family Law and was a research assistant for his Family Law Professor, helping update the yearly text of Family Law issues. Additionally, Rob was are search assistant for his Health Law Professor, helping her research and draft a bio-ethical article on advance directives and the application of life-sustaining procedures.

Chris continues to zealously fight for his clients every day, now in the personal injury and personal injury protection realm, alongside his colleagues at the Demesmin and Dover law firm. Chris embellishes in the fact that his work matters, and that he is able to make a difference every day, and the firm appreciates his everyday valiant dedication and effort.